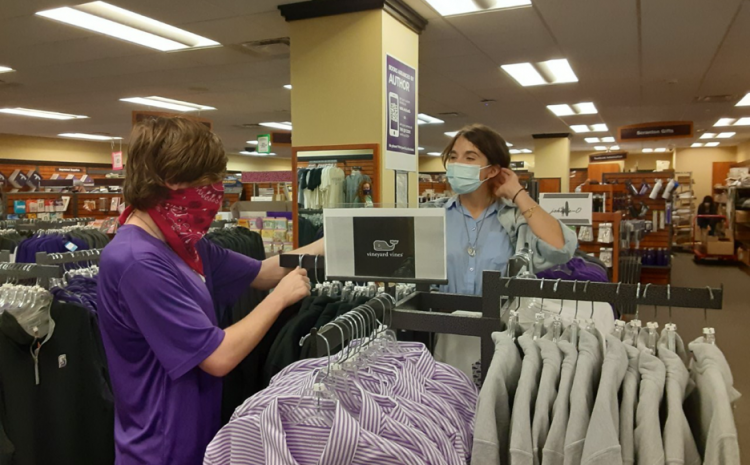 Many commuters such as Andrew Faulkner, sophomore accounting major from Avoca, and Alana Siock, senior French and international studies double major from Jefferson Township, use on-campus jobs at places like the bookstore to keep busy between classes and stay involved on campus.

SCRANTON – Commuters at the University say they enjoy their college experience, but those who live at home and drive to campus each day face some special challenges.

Time management and socialization stemming from active involvement off campus can be especially difficult for first-year students.

“Typically, first-year residents give themselves that time to adjust,” Mollie Boyd, a junior marketing major and president of the Commuter Student Association (CSA) said. “Commuters don’t really get that luxury because they still have jobs. They still have things to do at home. They still have other priorities.”

James Greenfield, a junior accounting major from Scranton and CSA treasurer, said it was difficult to find time his freshman year to do the things he wanted to do.

“I had to learn really quickly how important time management was- especially having a daily commute,” Greenfield said. “I had to immediately get used to having a really tight schedule.”

Greenfield recommended first-years download and use a scheduling app to keep track of appointments and assignments rather than risk double-booking themselves on appointment heavy days.

The second issue, socializing on campus, is one with no clear solution because it depends on the comfort level of the individual.

Justin Thomas, a senior computer science major from Olyphant, noted the importance of staying on campus for first-year commuters as the best way for students to overcome the social constraints commuting places on them.

“It’s a little awkward at first, sure,” Thomas said. “It just helps a lot if you tell yourself ‘I’m going to make friends and I’m going to stay on campus even if I don’t have anything to do right now, something is going to come up.’”

Students recognize that commuting poses a number of benefits, such as permitting commuters more financial stability by cutting the cost of room and board, as well as allowing students the opportunity to maintain a home and work life outside of the campus community.

In recent years, commuters on campus have taken strides to increase local students’ involvement, founding CSA in 2012. CSA focuses on providing forums for commuter students to socialize with and meet other commuters. These efforts have helped CSA succeed in forming a network of commuters on campus.

“It’s the friendliest clique you will ever be a part of,” Boyd said. “It feels like a clique, we all have inside jokes and really strong connections, but it’s so not exclusive. And I think it can be intimidating to see all of these people who have already formed these bonds. But if you can get past that and just say ‘hello,’ you will be so welcomed.”

Along with providing students the opportunity to connect with other commuters on campus, CSA also provides students with several resources through its moderator Julia Leighow, the director of off campus and commuter student life, and its RoyalSync page.

The resources available to commuters on campus include student lockers in The DeNaples Center. Lockers are assigned on a first come first serve basis. For more information on obtaining a locker email Julia Leighow at julia.leighow@scranton.edu.

Other resources include lists of parking lots for commuter students, places to eat on campus and places to study on campus, which are listed on the RoyalSync page for CSA.