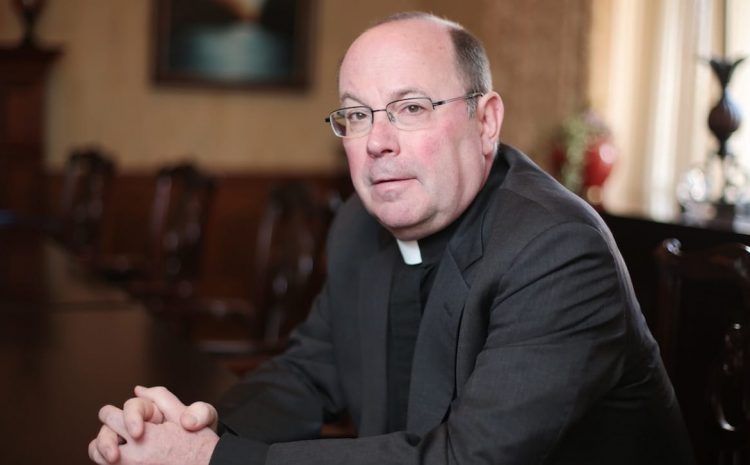 SCRANTON – When the University’s 27th president, Father Scott Pilarz, S.J., announced last month that he would be stepping at the end of this academic year, students were quick to share the University’s Instagram post with words of love and support for the president.

One group of students decided to show their support on an even bigger scale.

Seniors Gia Soule, Kyra Bevenour, Tess Ungerleider and Sabrina Verdi decided to make use of their large corner window in Montrone Hall by spelling out “Fr. Pilarz” in post-it notes.

The window originally read, “Welcome 2024” for first year move in weekend. The roommates were together when they saw the announcement video and enlisted help from friends Regina Schetroma and Ceara Giametta to put together the message of support.

“We wanted to how that the student community really cares and that we support his decision,” Soule said. “We were sad, but we all know how much he cares about us, so we’re glad he’s taking the steps to do what he needs for himself.”

News of Father Pilarz’s announcement quickly reached the alumni community as well, including those who were students during his first tenure as president of the University from 2003 to 2011. Ryan White, class of 2006, recalled how personable Pilarz is.

“He would stop you walking around campus and ask how you were doing or let you pet his dog,” White said. “He just always seemed genuinely interested in everybody.”

After leaving Scranton in 2011, Father Pilarz served as president of Marquette University in Milwaukee, Wisconsin, and later served at Georgetown Preparatory School in Washington, D.C. He returned to the University in 2018.

“I was thrilled when I saw he was coming back,” White said. “He’s someone who really gets Scranton. He understands the community and the students that go there.”

Pilarz has had an impact that spread far beyond the current students. Emails from the president always stood out to White.

“We would get letters from him in emails to alums that made me proud to have gone to Scranton,” White said.

The president has served as a symbol of the University of Scranton community to many people.

The University community received word of Father Pilarz’s decision to step down on Aug. 19 through a video sent out by the president. In the nearly six-minute video, Pilarz shared a personal message in which he explained his reasoning for stepping down.

“I can’t anticipate how well I would be able to fulfill my responsibilities as president in the future,” Father Pilarz said. “It has been made clear to me that Scranton will need a new leader for the upcoming decade.”

Father Pilarz shared his ALS diagnosis with the University community two years ago and continued to serve the community through worsening symptoms. The University has created a Presidential Search Committee and has begun to look for the University of Scranton’s next president.