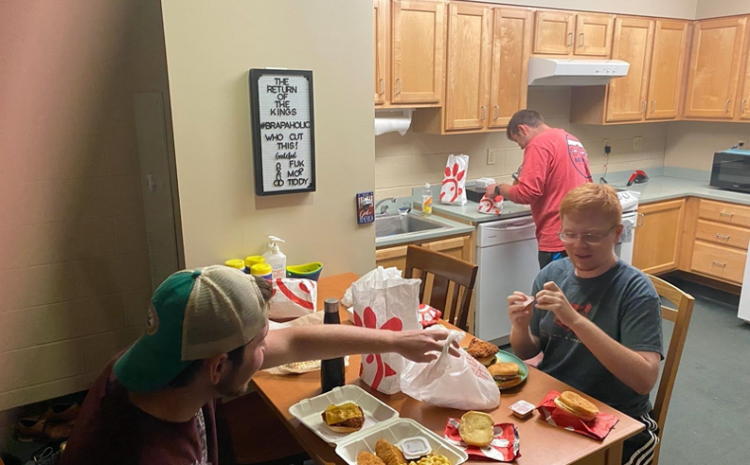 from left: Chris Volpe, Michael Volpe (standing) and Jon Wieland in the process of creating their original specialty sandwiches.

SCRANTON – With COVID-19 limiting on-campus activities this semester, some students are creating new ways to entertain themselves.

Juniors Michael Volpe, Chris Volpe and Jon Wieland set out to see what combination of foods could be put together to create the most delicious, yet budget-friendly sandwich using only vendors on campus, ranging from Chick-fil-A and Which Wich to RoadTrip America.

“We thought this would be fun to do since there isn’t much to do right now on campus except eat large amounts of food, and I don’t want to spend real money,” Michael Volpe said.

The four students each had different ideas of what kind of sandwich they wanted to make. Wieland built an item from McDonald’s secret menu.

“I wanted to recreate the McGangbang, which is a combination of a McChicken and a double cheeseburger,” Wieland said. “[It] is available at McDonald’s, but only if asked for specifically. It’s not on the menu.”

Wieland’s sandwich creation, a remake of the McDonald’s secret menu item, the McGangbang.

The sandwich consisted of two cheeseburgers from Grill Works, with a regular Chick-fil-A sandwich in between. All of the meat was coated with a layer of Chick-fil-A sauce.

“I call this the Southern Hospitality because it is a mix of Chick-fil-A and the southern cuisine place in big P.O.D.” Chris Volpe said. “It has mac and cheese, mashed potatoes, a spicy Chick-fil-A patty on a Which Wich roll with barbeque sauce on it.”

Michael Volpe created the largest sandwich out of the three. He started with a grilled chicken wrap from the deli in the big P.O.D and stuffed it with cut-up Chick-fil-A patties and fries. He then drenched the wrap in Chick-fil-A sriracha sauce.

“I am going to finish this sandwich even if it kills me,” Michael Volpe said.

The students expressed disappointment with the lack of options at some of the vendors. COVID-19 concerns have caused the University to limit the menus on food vendors to only a few items. Many vendors are limiting the hours that they are open as well.

“I was really hoping to get some queso or guacamole to put on my sandwich from Zoca, but it is closed,” Chris Volpe said.

The three made it no secret that the sandwiches made them feel sick afterward. Michael Volpe drank several bottles of water, and Chris Volpe had to lie down on the floor afterward. Wieland had mixed feelings on his experience.

“Although this tasted really good, I would not wish this upon anyone,” Wieland said.

Chris Volpe agreed with Wieland’s take on the taste of the sandwich.

“I’v got to admit even though this is kinda gross, this sandwich kinda hits differently,” Chris Volpe said.

Each sandwich cost one full meal swipe and about $10 extra in flex.

All three students agreed – these monstrous sandwiches might have been difficult to eat, but they were sure fun to create.