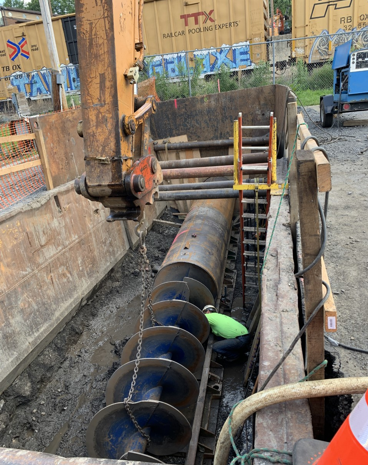 A construction worker preparing a drill near the Ridge Row site.

Roadwork limiting access to the University’s Ridge Row parking lot had been scheduled to end this week but could be delayed another one to two weeks while crews make emergency repairs to a nearby sewer main.

Crews were installing a water line in the area when they hit an active sewer main that is more 100 years old, said Mark Murphy, sustainability director and energy manager for The University of Scranton.

While it may be an inconvenience, it is not unusual for crews to have problems with utilities maps for older areas, Murphy said.

Construction on Ridge Row is part of a state-wide initiative by Pennsylvania American Water that includes installing a redundant supply line between Scranton and Dunmore to increase the reliability of the water supply.

“It has been a technologically fascinating project,” Murphy said, noting that he has seen a good deal of construction work during his 34 years with the University.

Murphy said the contractors had to angle a drill under railroad tracks to install the pipeline. They also had to push the line piece by piece up the shaft they made in order to avoid damaging the tracks or the area surrounding them.

Along with trying to avoid damaging certain areas in use above ground, the construction crew has had no limit of threats beneath the surface. On Ridge Row alone there are other water lines, natural gas lines and sewers the company had to locate and avoid.

Murphy noted that the contractors also had to perform precision work on North Webster Avenue while installing the line near a 12,000-volt University power duct that feeds electricity to 90 percent of the buildings on campus.

“I was definitely happy when they filled that in,” Murphy said.

While the technological aspect of the work is interesting, the lengths to which Pennsylvania American Water went to keep the construction sites safe is just as impressive, Murphy said.

“I’ve got to give the water company a pat on the back for their commitment to ensure safety on this project,” Murphy said.

Along with providing two types of fencing, a plastic, orange one and a metal one, the company has also provided trench boxes to protect workers in the event of a cave-in and special signs to help direct University traffic.

That is not to say the work has complicated operations for members of the University community. The Ridge Row parking lot and the one by Fitzpatrick field both have limited access because the workers are storing equipment in Ridge Row and gravel mounds in the lot behind Fitzpatrick field.

The maintenance and facilities departments on campus have had to continue regular operations with portions of their outdoor storage and even their driveway being used to store equipment and gravel. A temporary driveway had to be created for the department to use until the repairs are complete.

“We definitely have to thank our carpenters, plumbers and maintenance staff over the course of the emergency repairs,” Murphy said, noting the changes these departments have had to adjust to. “our facilities people have been cooperating with a lot.”

According to a company press release from Pennsylvania American Water, once a section is finished it will receive a coarse pavement for the time being. The worksite should be fully repaved within one to three months.

Any repaving that is not completed by the onset of winter weather will be finished in the spring.

The Ridge Row parking lot should remain open for the remainder of the construction, but Murphy recommended that anyone looking to park there should use Prescott Avenue to enter Ridge Row.