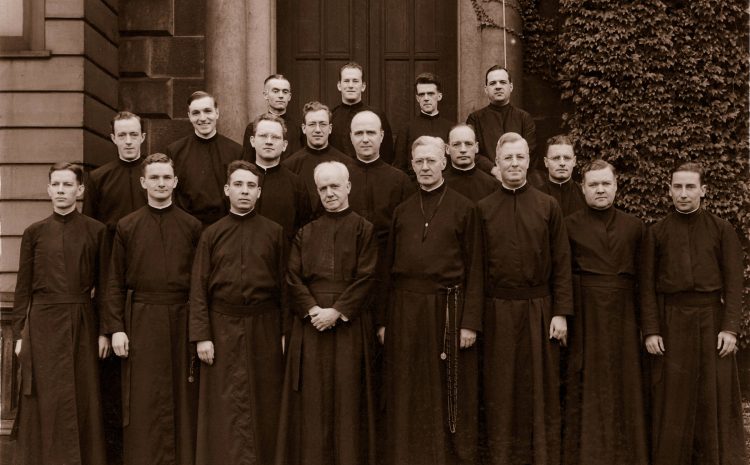 The Pioneer Jesuit Faculty, the first Jesuits to run the University of Scranton, courtesy of The Harry & Jeanette Weinberg Memorial Library.

SCRANTON – On Friday, Jun. 12, 1942, the last of the La Sallian Christian Brothers left the recently christened University of Scranton under the cover of nightfall, and sworn to secrecy after 45 years of stewardship, in an effort by Bishop William Hafey of Scranton to save the institution.

Economic downturn caused their sudden departure. During World War II, several administrative decisions brought the University into dire financial straits. Enrollment was down, the school’s athletic programs were running at a deficit and, the administration was struggling to pay off a $150,000 mortgage. That is the equivalent of $2 million today.

Alana Siock, a senior French and international relations double major, who co-authored a paper presented at the Wyoming Valley Undergraduate Historical Conference, said the University was on its last legs.

“Bishop Hafey had to find a religious institution crazy enough to take over the University,” Siock said.

Hafey’s search to save the fledgling university commenced. But it was not the first time the University had an up-hill battle to keep its place in Northeastern Pennsylvania.

One of the first challenges the institution faced came early after its founding as St. Thomas College by Bishop William O’Hara. He was the first bishop of the newly formed Scranton Diocese in 1888.

Poor funds delayed the construction. St. Thomas College was not able to open until 1892. Then came the staffing problem.

While Bishop O’Hara initially approached the La Sallian Christian Brothers in Philadelphia to provide staffing for the college, the Christian Brothers refused to supply teachers to the school. The number of brothers needed would not warrant the opening of new houses for the order.

The Xaverian Brothers were pulled out by their provincial because of the school’s low enrollment. Bishop O’Hara and his coadjutor, Bishop Michael Hoban, were tasked with staffing the school once again. Bishop Hoban was called to Rome and stopped in Philadelphia upon his return to negotiate with the Christian Brothers to have them staff the school. These negotiations were successful and for the next 45 years, the Christian Brothers would head the institution.

During their time at St. Thomas College, the Christian Brothers saw to it that the school was accepted by the Association of American Colleges and Middle State’s Association in the 1920s, saw the admittance of women into night classes in the 1930s, established a business school at the college, and then fought for the name “University of Scranton” until the early 1940s.

These successes did not change the fact that by 1942 the school was failing and neither the Christian Brothers, who were working to maintain La Salle in Philadelphia, nor the Diocese of Scranton, had the finances to keep the University’s doors open.

Bishop Hafey’s search ended when the Jesuits were the only order not to refuse his request outright. Their answer was not an immediate approval, however. Michael Knies, the special collections librarian and professor at the Weinberg Memorial Library, said there were certain pressures on the order for previous refusals of other institutions.

“The Jesuits had turned down the offer to take over another University recently and did not want church hierarchy to think they always said no,” Knies said.

The Jesuits originally told Bishop Hafey that they would see how the war turned out. They agreed to tour the campus before they made their decision.

On Friday, Feb. 13, 1942, V ice-Provincials of the Maryland-New York Province of the Jesuits, Father Anthony Bleicher, S.J., and Father Vincent Keelan, S.J., arrived at the bishop’s office to see the institution they were being asked to take over.

“In my opinion, it was a magnificent act of faith. It was not unlike that of Bishop O’Hara when, in 1888, he laid a cornerstone for a building he did not yet have the money to build,” Homer said.

The Christian Brothers stayed on to teach the summer sessions while the first 17 Jesuits arrived on campus. They were under strict orders to keep their withdrawal from the University quiet, swearing even the moving truck driver to secrecy while the Jesuits spoke of their plans to take over the University of Scranton openly.

Bishop Hafey welcomed the Jesuits to Scranton with a Mass, during which the bishop pledged the University’s commitment to the war effort and the community.