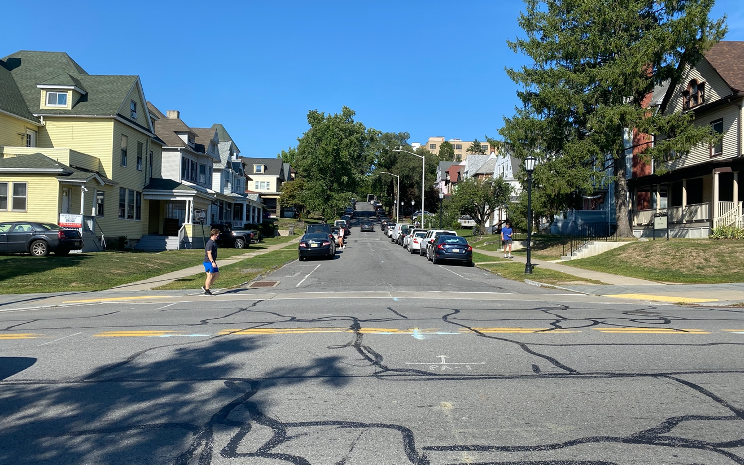 SCRANTON – Students say the freedom of living off campus at the University of Scranton is abundant, but some things should not be ignored in the process of making the big move.

According to current off-campus students, a conversation with friends typically arises introducing the question “should we move off-campus?” This leads to another question: “whom do we move off with?” This decision, combined with other factors, has dictated the degree of satisfaction among off-campus housemates throughout Scranton.

Housemates Gabe Baffuto, 21, Clay Avenue, senior psychology major and general business minor and Kevin Woehrle, 23, Clay Avenue, fifth year business administration major, say there is an emphasis on making sure the people you move off with are the right people.

“I think it’s important to choose people that you would consider similar to you in terms of cleanliness and focus on education,” Baffuto said.

“It’s important to establish a good communication with your tenants,” Dorry said. “I feel like we didn’t think a lot about that going in and we didn’t get all of [our landlord’s] contact information. She’s not good on her phone. I just wish we went in knowing what to do.”

Baffuto and Woehrle also said that partying, while being an aspect that enticed them to move off campus, can also come with downfalls.

Woehrle said usual partygoers are not as concerned with the mess they create.

Dorry and Wright said they experience noise from neighbors, not parties.

“We didn’t know we would be living with disruptions at night,” Dorry said.

Baffuto explained that moving off-campus gives you a glimpse into what being an independent adult is like.

“When you get off-campus, no one is coming in and sweeping your floor for you. Nobody is taking out your trash for you,” Baffuto said. When you move off campus, you really have to be more responsible with keeping a clean environment on your own, which sounds easy enough.”

Cleaning is an underestimated responsibility that both Baffuto and Woehrle have encountered during their time off-campus.

“At a certain point, you want a house that if I feel like going downstairs to do my homework in the living room I don’t have to worry about cleaning up an entire room full of garbage,” Baffuto said.

Dorry and Wright recently moved off campus after living in Montrone Hall last year. They said it came with some perks they no longer have living off campus this year.

“On-campus apartments we had to clean the same. We didn’t have any janitors like we did the first two years, taking out our trash and occasionally sweeping,” Dorry said. “This time we’re more aware of it because it’s a full-on living space. We have more room so there’s more to clean.”

Wright said discerning which housemate cleans common areas in the house and when is the gray area of responsibilities.

“We have our own responsibilities with our own rooms, but when it comes to the common areas it kind of gets a little hard,” Wright said.

According to Woehrle, not everything about moving off-campus has to be scary. He said he was excited about being able to express himself outside of a dorm.

“I like to customize my room. It’s more comfortable that way versus having to sleep on those little beds,” Woehrle said. “But also take into account, specific to Scranton, are you going to be living on Clay? What environment do you want to be in? That is important to think about.”

Dorry and Wright agree that moving off campus provides the opportunity to express individual interests and lifestyles.

“I finally have a place that I can call home,” Wright said. “This is my room, these are my memories.”

Saving money is another plus side to moving off-campus and Woehrle said it might even be the biggest one.

“You save a lot of money moving off campus. Not to say the meal plan isn’t necessary sometimes, it is, but it also isn’t. If you’re going to be the person that doesn’t give a crap about food – goes to your living room with it – the odds are you’re not going to be responsible enough to cook your own meal,” Baffuto said.

Dorry said students are fortunate that costs in Scranton are low, relative to many larger cities in the nation.

“We should take advantage of the fact that we do live in Scranton, Pennsylvania, and we are blessed with affordable rent costs,” Dorry said.

“If you’re on campus, the housing is really expensive. Let’s think about the food. When it comes down to it, they’re over charging you a lot. If my mom gave me what we spend on campus now, I would be living. I’d literally be so happy, but I don’t deserve that, I don’t need that kind of money,” Wright said.

Baffuto said people grow up throughout college, and, given the newfound responsibility, that is a good thing.

“People have definitely grown up a lot being here because I think immaturity is something you get out of your system pretty quick [moving off campus],” Baffuto said.

Dorry said being a living in an off-campus house has given her a personal sense of maturity.

“I grew up. I learned to stop living for other people and that’s what you have to do to be an adult. You have to make hard decisions sometimes. Living off campus is the first step of that, getting away from your parents and stepping out of your comfort zone,” Dorry said.

Along with maturity, the final step of growth has manifested in the form of being financially smart, according to Wright.

I used to blow through my money. Knowing how much everything costs [and] what’s more of an investment, like spending more on mozzarella that’s really good or spending more on [other] things you have to invest in every single week, you’re just smarter with your money,” Wright said.