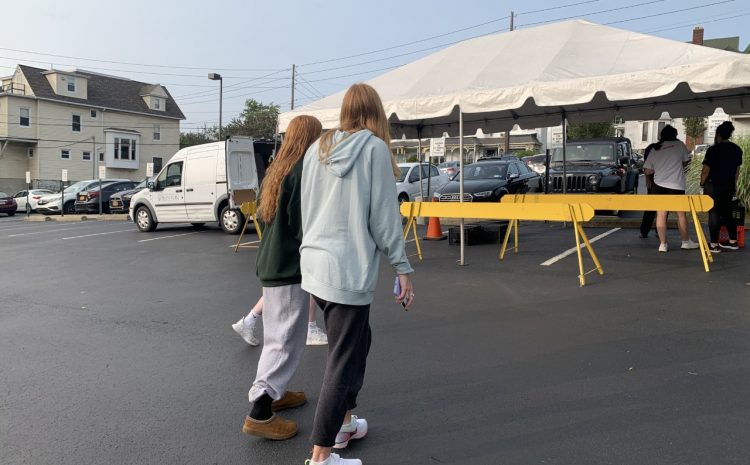 Seniors Anna Donnelly and Mazie Stiles at the food tent on Quincy Avenue.

SCRANTON – Once the initial shock of being placed in quarantine settles in, the first question many students have is, “How am I going to eat?”

At the University of Scranton, students living in dorms didn’t have to think too long before being told meals would be delivered to the dorms. For students off campus, it was a different situation.

In the parking lot on Quincy Avenue behind Pilarz and Montrone Hall, a white tent occupies empty parking spots. This is where off campus students with meal plans can journey to twice a day to get food from Royal Catering staff. Between 12:30 p.m. and 1:30 p.m., students can go pick up their lunch. Dinner can be picked up between 5:30 p.m. and 6:30 p.m., where students will also be given breakfast for the next morning.

Senior Anna Donnelly took her first trip to the tent recently to get dinner at 5:30 p.m. and joined two other off-campus students waiting for the van’s arrival. The Royal Catering van arrived about five minutes later, and Donnelly and her housemates, seniors Mazie Stiles and Shae Guilfoyle, began swiping their Royal Cards. They said they then proceeded through the tent to grab bags of food and bottles of water from the back of the van.

Inside the bag was their dinner for the night and breakfast for the next morning. Dinner consisted of ravioli in red sauce with broccoli, a breadstick and a salad. For breakfast, they were given a yogurt, a muffin, and a pastry bar. Donnelly said that while the experience was very accommodating, she did wish there was a choice in food.

“I understand they can’t have a whole buffet, but maybe just a second option,” Donnelly said.

Lunch the next day was better, Donnelly said. She and Guilfoyle went back to the tent and were given two turkey sandwiches, one on white bread and one on a roll, with cheese, lettuce and tomato. The two were also given water, a cookie and an apple. Staff asked if they were gluten free or vegetarian as well. When asked if she had any recommendations for improvement, Donnelly said longer time slots might be more beneficial.

“I wish they would extend the time slots because one of my housemates has class during the one hour and couldn’t go,” Donnelly said.

For some students, this message arrived well into their quarantine. Senior Emily Foster entered quarantine on Aug. 28, before Davis made the announcement. Foster tried to get in contact with someone over the weekend regarding her meal plan options, but offices failed to answer her calls.

“I felt like when they told us what to do in terms of getting meals it just felt like they hadn’t entirely thought about off-campus students who still had a meal plan,” Foster said.

She was finally given guidance a few days later about how to proceed. At this point, the only option for Foster was to give her Royal Card to a fellow student.

“I didn’t want to have to have the same person responsible for getting me food, but also living off campus meant that they would have to walk back and forth between my house and campus multiple times a day,” Foster said. “It just felt like a lot of work.”

Foster did not use any of her meal swipes during her two-week quarantine. Even with the option of getting her own meals, Foster said she didn’t feel comfortable going to the tent because of the risk of exposure.

“I didn’t like the idea that any student in quarantine who could potentially be positive was able to break quarantine to go pick up meals, all in the same place at the same time,” Foster said.

When asked about meal swipes getting reimbursed, Foster said she was not expecting to get them back.

“I don’t expect to get those meal swipes back, and I don’t blame the school for that,” Foster said.

The only recommendation Foster made moving forward was to have meals delivered to off campus students.

“I think they should be able to look into delivering to off campus houses, at least for certain meals,” Foster said.