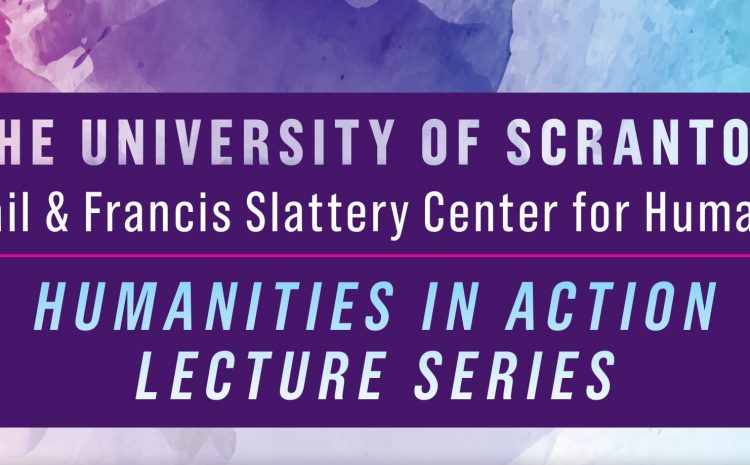 Julie Schumacher Cohen, assistant vice president for community engagement and government affairs at the University of Scranton, provided introductions for Cognetti, Schmitt and moderator Adam Pratt, Ph.D., associate professor of history. Cohen also gave thanks to the Slattery Center’s director, Greg Jordan, for assisting in orchestrating what she called a world-class panel for very engaging conversation.

“The conversation this evening [covers] a range of issues: national security and how global issues such as immigration impact local communities including here in Scranton, the condition of democracy and the importance of trust and the value of a humanities-based education to tackle the many problems we face in an interconnected world,” Cohen said.

Schmitt, who shares three Pulitzer Prizes, started his career as a local education reporter for The Tri-City Herald in eastern Washington state. He has now worked with The New York Times for 37 years, covering terrorism and national security. In the past 13 years, he has had assignments to Pakistan, Afghanistan, North Africa, Southeast Asia. Prior to his career in journalism, Schmitt earned a humanities-based bachelor’s degree in international relations at Williams College.

During introductory remarks, Pratt said there is often a discourse that studying humanities can be a discourse to unemployment. Schmitt said, looking back on his studies in the humanities, three key elements of his education have become themes in his journalism today, and may assist students going forward as well: connections with others, empathy and humility and the push to always challenge assumptions.

“The global community has, in many ways, become a very small one. Put yourself particularly in the shoes of somebody who you may not feel much affinity with or have had much experience with, and get their point of view,” Schmitt said. “That can be so important, whether from a business standpoint, certainly from a journalism standpoint, and I think we now see from a public policy and government standpoint as well. Look at what may end up being inequities or inequalities, in terms of social terms, racial terms or socioeconomic terms.”

Schmitt discussed how these takeaways led to his various career choices post-graduation. He said he found himself choosing between three paths where he felt his skills could be put to best use: journalism, foreign government service and education.

“I felt these would be ways of connecting with my community at those various levels. I ended up going the journalism route but I’ve kept a close hand in the other two as well, and these are all three institutions right now that I think are vital to our local communities,” Schmitt said.

While Schmitt joked that he chose journalism because public service didn’t want him, Cognetti has built a life-long career on serving her community. Cognetti earned an MBA from Harvard Business School and studied English literature and romance languages at The University of Oregon. Prior to taking office as mayor in January 2020, she worked to address financial distress and public mistrust with the Pennsylvania Auditor General and the Scranton School Board. She also previously served the U.S. Treasury Department under the Obama Administration.

Cognetti said she smiled to herself when Schmitt mentioned empathy as a core value in his work because she too tries to lead with empathy every day as mayor, which she learned from her humanities education.

“When you meet someone, you know that you don’t know their whole story. Literature and the humanities teach you to always be thinking of that, and that’s what I’ve taken with me to public service. We are here in the city of Scranton and, under my administration, we are here to show people that we care about them, no matter how much they pay or don’t pay in taxes – we’re trying to get everybody to pay their taxes,” Cognetti joked. “No matter the color of their skin, what their sexual identity is, what their heritage is, whether they’ve lived here for 13 generations or they just moved here, we want to serve them and help them.”

Cognetti said she credits her calling to serve with empathy through public service to a moment she was abroad in Japan standing in a lunchroom of nearly 60 teachers in March 2003, watching President George W. Bush’s announcement of the United States’ going into Iraq. Many of those teachers had grown up hearing stories from their parents about life in Japan during World War II, and Cognetti said she felt 120 eyes on her, as the American foreigner.

“They were astonished that any country would go in as aggressors into another country, especially the United States. In that moment there was a change in me that I felt I needed, when I got home, to be part of the solution… to chart a different course for the nation,” Cognetti said.

Cognetti said her service is simply obligation, which, for her, all goes back to empathy.

As testament to those crazy places, Schmitt said there are major thematic changes happening regarding national security throughout the world, including a sense of a new Cold War, as he called it, between the United States and Russia and China.

Cognetti asked Schmitt if he feels this new phenomenon is due to a fear of other, possibly due to social shifts throughout the current administration, to which he said he certainly thinks so.

“Particularly when you get into the questions of immigration, but even the way that the president talks about China. The pandemic is the China plague, as he puts it. Clearly you see a shift in this administration’s rhetoric of an us versus them – a much more divisive type of approach in considering national security issues that we’ve perhaps seen in the recent past – as opposed to unified against a threat,” Schmitt said.

Cognetti said a focus on fear of other is a wedge that some want to drive in the American people’s trust in institutions. She gestured to the side, and said if citizens are focusing on threats “over here,” the focus is then taken away from necessary problems and institutions, which she said has been a prominent issue in the last three and a half years particularly in terms of public trust.

“We can’t fix what the federal government is doing right now. Everybody has to make sure that they’re registered to vote… We all do have a voice… and we have to fight back. Our way of fighting back in Scranton is to rebuild that trust at the local level,” Cognetti said.

Schmitt also stressed the the importance of building trust at all levels, especially while working for an organization like The New York Times, where credibility is crucial.

“I think the way you do that is to become more and more transparent in how we get our information so people have trust in it. Whether it’s trust in your institutions, whether it’s the institution of the media or in public service and government… It’s rebuilding trust, and I think probably from the local level up is how it’s going to have to happen,” Schmitt said.

Schmitt said despite the world being in turbulent times, it is also the golden age of storytelling. He encouraged students earning a humanities-based degree that job opportunities are certainly still there.

Cognetti agreed that while the pandemic may not appear an ideal time to start a job hunt, Schmitt’s notion of keeping at it is key advice.

“Don’t let perfect be the enemy of the good… If you are interested in something and it’s not the exact thing that you want but there’s an opportunity, apply. Keep at it – apply, apply, apply. A cold email or LinkedIn message is not as strange as it maybe looks like to you… Send out that random email… Raise your hand, step up,” Cognetti said.

Cognetti said the dialogue she experienced during Wednesday’s lecture was a lot of fun, and highlighted how important the humanities are.

“It was legitimately fun,” Cognetti said. “I think on the surface people don’t always realize how much there is to talk about, but I think our conversation is a great example of how important the humanities are and how broad the career tracks may be for people that major in [things like] literature, history and foreign affairs,” Cognetti said.

Pratt fielded questions to the panelists from attendees Diane Stango, Hank Willenbrink and Robert Watts on foreign policy, conspiratorial mindsets of voters and the military. Pratt concluded the hour-long discussion with encouragement for all attendees to not give up fighting for what they believe in.

“Make sure you’re registered to vote. Continue participating in the civic process and have conversations with your neighbors and your family, as uncomfortable and difficult as that can be. [Don’t] give up,” Pratt said.