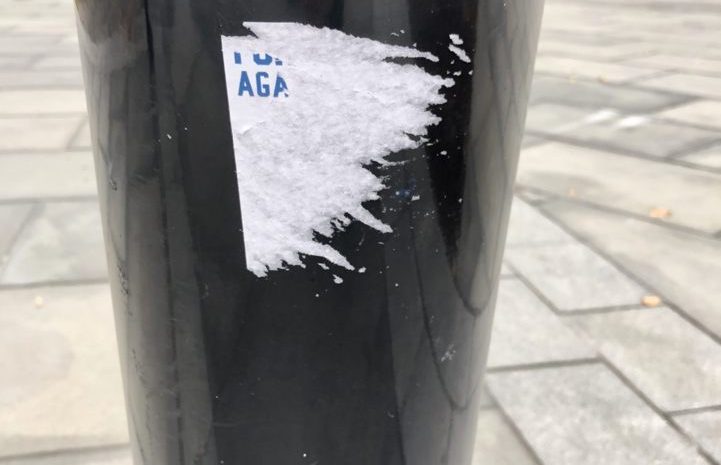 Joshua Rudolph removed this sticker from a post outside Alumni Memorial Hall Sunday.

Joshua Rudolph, ’21, said he was going into work at the end of the weekend and found the stickers on signs, poles and the AMH building itself.

“Patriot Front is an image-obsessed organization that rehabilitated the explicitly fascist agenda of Vanguard America with garish patriotism,” according to SPLC’s website.

Rudolph said he tore the first sticker he saw down, but more stickers were left behind.

“I talked to Dean Rivera and they’re doing an investigation on it. All I know is that those stickers were posted,” Rudolph said.

“I learned about a few stickers outside of AMH yesterday affiliated with this group, which is quite concerning,” Rivera said.

Rivera declined to comment further, however Pilarz sent an email to the University community Monday night addressing and denouncing the incident.

“As I have emphatically stated before, bigotry, hatred, racism and anti-Semitism run contrary to the core values of our Catholic and Jesuit university and will not be tolerated on our campus,” Pilarz said.

“They placed stickers in several areas on campus then returned to the downtown area on Linden Street. The individuals appear to have no affiliation with the University,” Pilarz said.

Pilarz also said he is deeply offended by the occurrence and the stickers’ message.

“Given what I have heard from students and knowing the efforts that have occurred thus far, I am sure that members of the community are also angry, deeply offended, and even fearful as a result of these stickers promoting white supremacy… Anyone with concerns for personal safety should… contact University Police or the Scranton Police.” Pilarz said.

“Stay safe and tear [the stickers] down if you see them,” Rudolph said.

University Police ask that anyone with further information about the incident contact them at 570-941-7888.