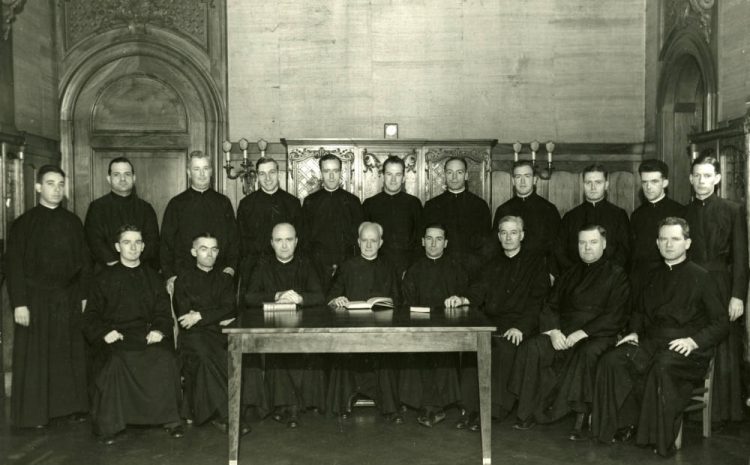 SCRANTON – Wyoming Avenue, Scranton, 1942: A pioneer staff of around 20 Jesuits arrived at the indebted University of Scranton at a time of dwindling enrollment and uncertainty over seas.

Frank Homer, University of Scranton historian, said their arrival came at what was still the beginning of the war.

“In 1942 the Axis forces in Europe and the Pacific were seemingly unstoppable so nobody had any idea of how long this war would last, just that it was really not going to be over anytime soon,” Homer said.

Homer said this became challenging as the daytime college at the University was male only and the state of the war increased the uncertainty for many men as to whether they would be able to finish their schooling.

“You would be in a classroom of 30 or so and the next day you come in and there would only be 28, two had already been conscripted,” McIlhenny said. “If you were going to school at that time, it would be something you would face every day.”

This left first the Christian Brothers and then the Jesuits with the dilemma of enabling young men to start and possibly finish degrees before being called to serve.

“The University was operating year-round,” Homer said. “They had kind of accelerated semesters, so some guys actually were able to finish a bachelor’s degree in two years.”

Between this challenge and dwindling enrollment, the new administration faced a housing problem that would change the University’s geography years later. The housing previously used by the Brothers was ill-equipped to house almost double the number of Jesuits. The result forced the University to its current location on Linden Street.

Aside from problems plaguing the University, the Jesuits set their eyes on their new school’s previous students.

Father Vincent Bellwoar, S.J., student counselor at the University, made it his mission to track down as many names and locations of former students serving in the military as possible and open correspondence with them.

Bellwoar compiled a list of over 400 men and their locations and had the bi-weekly editions of The Aquinas sent to them. He then allowed highlights of their letters to be compiled and placed in a column of The Aquinas, titled “An Open Letter to Camp.” Through these means, former students were able to keep tabs on the current campus community and former classmates.

McIlhenney said the Jesuits’ devotion to former University students was important to their administration.

“One of the first things they did during the war was to reach out and make contact with [the servicemen],” McIlhenny said. “It was really important to everything we preach [on campus]. You know that cura personalis that you hear so often – this was a perfect example of it.”

While they focused on maintaining a sense of community with their alumni abroad, the Jesuits also made headway in curbing the school’s debt by ensuring tuition was paid, something the Christian Brothers were less vigilant about, according to Homer.

“Once the Jesuits arrived, one thing they were very adamant about was that the tuition had to be paid,” Homer said. “The tuition was minimal, but they said ‘hey it’s gotta be paid.’”

Homer said the plan to collect lapsed tuition payments worked, evident in that, by the late 1940s, the University was no longer in debt. With the close of World War II, the Jesuit administration was able to cash in on the post-war boom and the number of young men interested in pursuing their degrees on the G.I. Bill. An era of growth was looming on the horizon after nearly two decades of economic downturn.