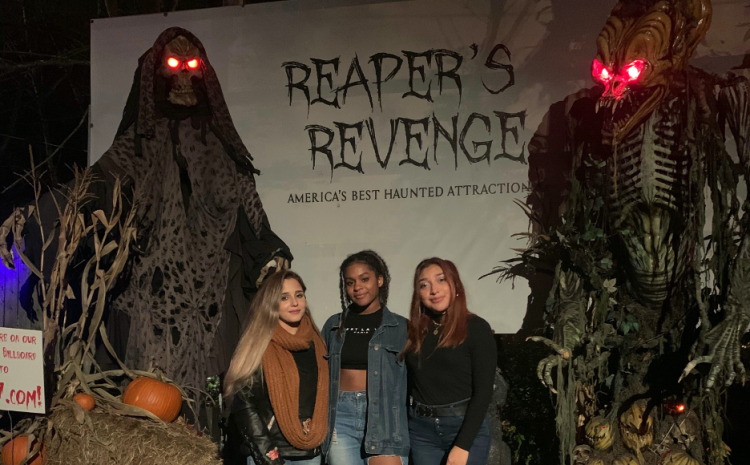 As seen from left to right: Daniela Salcedo, Corine Auguste and Jalitza Vazquez.

Despite the huge horror that is 2020, Reaper’s Revenge continues to offer scary entertainment with their haunted hayride, a maze and two walk-through haunted houses including a new 3D attraction called Delirium.

Salcedo and Vazques both agreed the hayride was their favorite part of the amusement and theme park due to the occasional stops that included difference acts from popular horror movies such as The Ring, Nightmare on Elm’s Street and Friday the 13th. Actors also dressed as zombies hopping on board, according to Auguste.

Although Auguste enjoyed the hayride she said her favorite part was Reaper’s Revenge’s new attraction Delirium, which provides guests with 3D glasses upon entering. Auguste said the way the house was set up messed with her mind.

“It was like a glow in the dark neon kind of maze thing going on and they had people that blended into the wall so that you wouldn’t notice them… [then] they would come out and scare you,” Auguste said.

This 65-acre amusement and theme park takes a minimum of 60 to 70 minutes to get through, beginning with the hayride, which takes you to the other attractions on the site.

Regardless of Reaper’s Revenge’s efforts to stay open during the pandemic, the students said they felt the experience was not as exciting or scary as it has been in past years.

“Last year was scarier because sometimes the actors would physically touch the people causing them to be scared more. Also, they took out one of their best attractions, Pitch Black, due to Covid-19, so I’m looking forward to them opening it back up hopefully next year,” Salcedo said.

Vazquez agreed that while being touched by actors was scary, it adds a realistic touch to the experience, which is lacking this year.

“The actors are not allowed to touch you or stand to close [due to COVID-19.] In previous years I know the actors would pull your feet or get very close which would make it significantly scarier,” Vazquez said.

Although actors are not allowed to touch guests or get too close, guests are still required to sign a waiver to enter.

Ticket prices vary depending on the day. Reaper’s Revenge is open 6 p.m. to 11 p.m. Friday, Saturday and Sunday until Nov. 1. More information on pricing can be found on their website.

Salcedo, Vazquez and Auguste paid $42 and change after taxes. Vazquez says her experience with other haunted attractions, such as Headless Horseman ,compare to this price, making it reasonable.

Due to COVID-19, some of their typical attractions, like Pitch Black, being closed and actors not being allowed to touch guests, Auguste says the price is not worth it and she expected them to lower it this year.

The students still recommended Reaper’s Revenge, 460 Green Grove Road, Blakely, to people in the area, despite the experience being different from years prior.