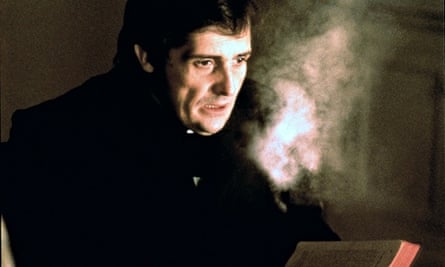 SCRANTON – Tony Award and Pulitzer Prize-winner Jason Miller is the man behind the Father Damien Karras mask in The Exorcist, a film now celebrated as one of the most profitable horror movies of all time, according to Town & Country Magazine. He is also an alumnus of The University of Scranton.

Miller was born John Anthony Miller to a teacher and an electrician in Queens, N.Y. on April 22, 1939. His parents, Mary Claire and John Anthony Sr. moved to Scranton in 1941, where Miller enrolled at St. Patrick’s High School, which closed in 1969.

Miller then earned a degree from the University in English in philosophy, and went on to attend the Catholic University of America in Washington, D.C. The Associated Press initially reported Miller earning a master’s degree within the speech and drama department at Catholic, but in a 1974 interview with The New York Times, Miller told reporters otherwise.

“[I was asked to leave] for never attending classes, never taking tests and never getting the girls back to their dormitory by 10 o’clock,” Miller said.

Following his studies, Miller worked side gigs as a welfare investigator, waiter, truck driver and messenger boy, according to The New York Times. All the while, he was writing plays. Miller wrote ”The Circus Lady,” ”Perfect Son,” ”Lou Gehrig Did Not Die of Cancer” and “Nobody Hears a Broken Drum,” which was produced off-Broadway in 1970, before winning the Pulitzer Prize for “That Championship Season” in 1972 and the Tony Award for Best Play in 1973.

“That Championship Season,” a play that follows four former basketball players from a winning high school team who reunite with their coach, was inspired by Miller’s own experience playing for St. Patrick’s High School basketball team throughout the 1950s. The original play was directed by Tony Award-winner A.J. Antoon and showed at Joseph Papp’s Public Theater in New York. Later moving to Broadway, the play’s cast included Charles Durning, Paul Sorvino and Richard Dysart.

Miller went on to direct the film adaption of his famed play by the same name, released in 1982. Based and filmed in Scranton, That Championship Season starred Robert Mitchum, Martin Sheen, Bruce Dern, Stacy Keach and Paul Sorvino, the only actor to have also appeared in the original play.

A 14-show off-Broadway revival of the play was directed by Scott Ellis in 1999, and Gregory Mosher directed a 2011 Broadway revival, casting Miller’s son Jason Patric as Tom Daley.

In 1972, the same year Miller’s play won the Pulitzer, he was also cast as Father Damien Karras, the priest in William Friedkin’s The Exorcist. Miller was nominated for an Academy Award for Best Supporting Actor for his role as Father Damien.

According to an interview Miller gave to Film Buff Online in 2005, the playwright faced heavy competition for the role, including Jack Nicholson and Ryan O’Neill. However, Miller said his less-than stardom and Catholic and Jesuit educations actually played out in his favor.

“[The producers] preferred an unknown because they wanted the story to be the star. They had to convince the powers that be at the studio and that was quite a bit of salesmanship,” Miller said.

The Exorcist book, at its time of conversion to film, had stood 56 consecutive weeks on The New York Times best seller list. Miller said it was evident the audience had already been built, making an A-list star a nonfactor.

“Fifty-six weeks for a book on the best seller list means there’s an enormous amount of people reading that book, which means an enormous amount of people are going to go see that movie. They also don’t want people to say ‘Wasn’t Jack Nicholson great?’ They want someone like me with no face at all to lend a sense of honesty and truth to the character,” Miller told Film Buff Online.

“I’d prefer that when I take the bus to another zone, I go further. I’m not interested in coming back.”

Jason Miller, in an interview with Electric City in 2000

Having a fresh face was only half the trouble. Miller described the transition from stage to film as being quite different, like talking on the phone rather than projecting to an audience.

“I love rehearsals. [In movies,] you don’t get rehearsal. They want to catch spontaneity. They love spontaneity. A lot of time spontaneity can be dreadful. Being a theater person, I like rehearsal because you can discover things,” Miller said.

Though Miller’s character died at the end of The Exorcist, he still went on the appear in Part Three of the sequels. The original film, released on December 26, 1973, became the fifth highest-grossing film of its decade, and still ranks among the best and scariest horror movies of all time.

Shlesinger graduated from Gonzaga College High School, Washington D.C., in 1968 and The University of Scranton in 1972. Shlesinger said the author of The Exorcist, William Peter Blatty, told him, while Blatty was on a visit with Miller in Scranton, that the story was based off a boy who attended Gonzaga.

“[Blatty] changed the possessed character to a girl – Linda Blair – because the boy, who the exorcism was based on, was still living and had no recollection of what had happened to him, and Blatty wanted to keep it that way. The boy, he said, did not need the publicity for something that he had no recollection of ever happening,” Shlesinger said.

Shlesinger said he personally recalled the story of the 14-year-old Maryland boy, who the attending priest, Raymond J. Bishop, gave the pseudonym Roland Doe in 1949, coming up on three or four occasions during Shlesinger’s time at the school.

“One in particular was when, during prayers before class, [Doe] broke out in a cold sweat and started speaking in gibberish and in strange tongues.They knew then that something was wrong,” Shlesinger said.

According to Father Bishop’s diary, the Doe became a fine young man following his exorcism, even going on to marry, have children and maintain a career with the United States government before retiring in Maryland. Doe has never spoken publicly on the occurrences of his childhood.

“Father Bishop, Father Bowdern and at least six other Jesuits took part in Roland Doe’s exorcism, much of which took place in an upstairs bedroom at this home, which belonged to the boy’s relatives, in the Bel-Nor neighborhood of Saint Louis, Missouri, USA, 20 March 2013.” EPA/JIM LO SCALZO, via the Denver Post.

Shlesinger said Father Eugene Gallagher S.J., named as a concelebrant in Scranton’s Commencement Weekend Class Exercises of May 1971 and a donor to the University in its former magazine “The Scranton Journal” in the same year, was a Jesuit priest at the University when Shlesinger was a student there. Miller’s longtime friend said Gallagher took part in Doe’s exorcism, and was subsequently featured on CBS Evening News with Walter Cronkite around 1972.

“I will never forget him telling Walter Cronkite on national television, ‘The thing came at me and the book (the one he was praying from) literally disintegrated in my hands,'” Shlesinger said.

According to The Hoya, Gallagher went on to teach theology at Georgetown University, Washington D.C., where he discussed the exorcism and inspired one student in particular to write about the haunting happenings of the Georgetown area in the 1940s. That student was William Peter Blatty.

“I will never forget him telling Walter Cronkite on national television, ‘The thing came at me and the book (the one he was praying from) literally disintegrated in my hands.'”

While Blatty’s The Exorcist has risen to fame over decades for its ability to spook viewers of all ages and backgrounds, Shlesinger said Miller told him religious communities offered warnings regarding subject matter to the production team and actors prior to filming.

“The entire cast and crew of The Exorcist was briefed by the Jesuit Community and other religious scholars to take what they were filming very seriously because the devil, they warned, was extremely powerful and not something to mess with,” Shlesinger said. “The Exorcist still remains the greatest horror movie of all time.”

After The Exorcist, Miller acted in several other films, including The Devil’s Advocate, The Nickel Ride, The Ninth Configuration and Rudy, in which he played Notre Dame football coach Ara Parseghian, among others.

Miller returned to Scranton after years of living in New York in 1982. On May 13 2001, he suffered a heart attack at Farley’s Eatery & Pub, formerly of 300 Adams Ave., where City Market and Cafe is now. Miller was rushed to Mercy Hospital, 743 Jefferson Ave., where he was pronounced dead the same day.

The City of Scranton commissioned Paul Sorvino, Miller’s longtime friend and a cast member in That Championship Season, to build a bronze bust of Miller, which now sits in Courthouse Square in downtown Scranton.

According to the Associated Press, the year before his passing, Miller spoke about his outlook on where he was headed upon death in an interview with Electric City ahead of the Pennsylvania Film Festival.

”On my tombstone I’ll put, ‘It’s all a paper moon.’ All the philosophies and all the -isms and all the religions are contained in that. . . . I’d prefer that when I take the bus to another zone, I go further. I’m not interested in coming back,” Miller said.