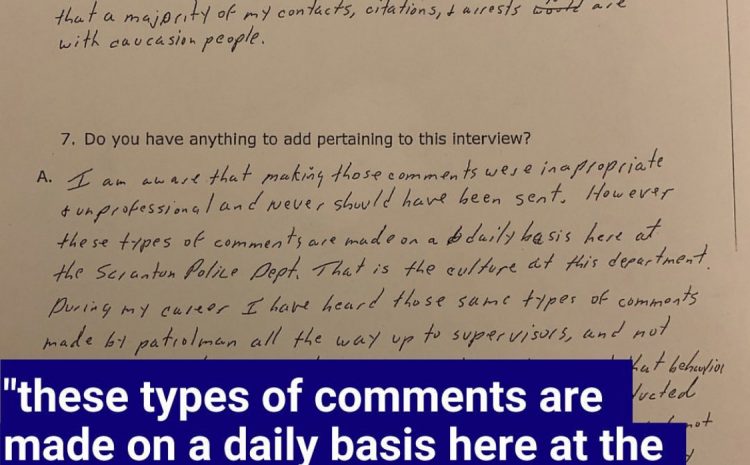 SCRANTON – The City of Scranton formally terminated two police officers in June after uncovering what it called “severe, repulsive racial bias” in a statement on measures addressing bias. The 2021 City Budget will now address police and administrative training, among other new spending allocations.

In August, court rules required the City to provide a confidential internal affairs investigation file to the plaintiff, Dajuan Saunders, who was seeking money damages against the City regarding incidents of racism with former officers Thomas McDonald and Bryanna Gifford. Saunders then shared the file via social media Nov. 8, which the City said in a statement it was unaware the plaintiff would do, and “strongly believe[s] he should not have.”

The file, from Scranton Police Captain Lukasewicz to Chief Carl Graziano, Superintendent of Police, from Feb. 3 detailed hundreds of pages of text messages between McDonald and Gifford, referring to various minorities using slurs.

McDonald, during an interview where he was asked to write down if he had anything to add regarding the incidents, said he was aware the comments were inappropriate and unprofessional, but that similar comments had been made daily during the duration of his employment with the Scranton Police Department (SPD).

“That is the culture at this department. I have heard those same types of comments made by patrolmen all the way up to supervisors, and not once do I recall anyone taking offense or trying to correct that behavior,” McDonald wrote.

SPD Chief Leonard Namiotka said in a news release he wished to clarify the statements made by McDonald as “100% false.”

“Any actions of this kind will not be tolerated in the Scranton Police Department. This is made clear by the terminations, previously this year, of the two officers for their behavior,” Namiotka wrote.

We demand transparency from the SPD and proof of how the proposed 50% increase to the SPD training budget ($50k to $75k) will change the actions of this local tax-payer funded institution.

Namiotka also said the SPD is coordinating with the Penn State Blue Program to increase bias-based training and foster greater community-police relationships, which it plans to continue in 2021. The City has slashed the Municipal Police Academy Training (Act 120) as a requirement for the entry-level test, hoping to diversify its applicant pool, according to the report.

In a news release from the Office of the Mayor, the City said it also has zero tolerance for this mindset or culture.

“As our actions demonstrate, this administration has zero tolerance anywhere in our work force for the kind of repulsive, racist behavior revealed in this investigation, and we will act swiftly and severely in response to such an incident. However, we want to make very clear that the actions of those two former police officers do not reflect the culture of the Scranton Police Department nor the values of our City or workforce as a whole,” the release said.

Mayor Paige Cognetti outlined new additions to the 2021 City of Scranton Budget designed to address the incidents. Related planned changes include a 50% increase in police training budget, an 800% increase in city administrative training, $10,000 allocation to explore ways to establish an Independent Police Review Board, a restart of the Human Relations Commission and a 50% reduction in guns and ammunition. Cognetti submitted the budget to the City Council Nov. 13.

Namiotka apologized to the Scranton community for the department’s recent events, and encouraged further questions be submitted to him at lnamiotka@scrantonpa.gov.

“As Chief of Police, it is my job to see that our officers are held to the highest of standards of conduct and integrity… I’m sorry for any pain or confusion that the revelations of the behavior of those two former officers may have caused,” Namitoka said.

Black Scranton Project, Inc. has called for proof Nov. 10 on their Instagram that “the actions of these two officers do not reflect the culture of the Scranton Police Department.”

“We demand transparency from the SPD and proof of how the proposed 50% increase to the SPD training budget ($50k to $75k) will change the actions of this local tax-payer funded institution,” the post said.

The organization has suggested the establishment of an Internal Review Board and a Citizens Review Board.